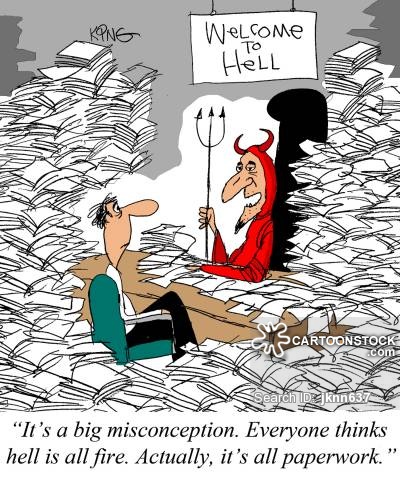 I call them the “Paper Pushers.”

It is my private name for my colleagues in the public relations industry through years who are great at performing administrative tasks, coordinating accounts, and editing, but they can’t write worth a shit and overall lack creativity.

They are great at “pushing the paper” and making sure they stay on top of tasks, crossing every t and dotting every i, but they are pretty much useless when it comes to thinking out of the box and coming up with creative angles for PR campaigns, media pitches and press releases. 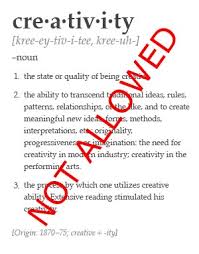 Actually, they are mostly glorified administrative managers, but of course, they would never admit this.

They typically stay quiet during brainstorming sessions, offer little or nothing, but the paper pushers are quick to attack others’ ideas, though. 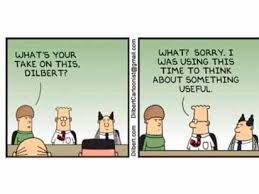 Honestly, they wouldn’t last long in my previous profession of journalism where bad writing is generally not tolerated and will hold you back in your career.

It is hardly surprising the paper pushers have done well in the public relations industry, which is a sad commentary on what the business cherishes – slick, management over creativity. 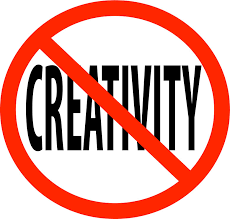 So, naturally, I have butted heads with my share of paper pushers during the years. They have rejected my creative ideas, gutted my pitches and press releases, and removed anything creative or interesting and replaced it with slick corporate writing. The kind of boring writing that ends up in the media’s spam and trash folders.

I have worked with many paper pushers during my long career, but two past colleagues come to mind to illustrate my frustration working with these uncreative types.

As mentioned in an earlier blog, Molly Paulson was an uptight, paper pusher who ran the New York office for Lulu at the Yilmaz Agency. She also managed two of the largest clients at agency, an airline and housewares company.

Molly, who was in her early thirties, had an odd looking face and huge green eyes. She also had this bizarre wide-eyed expression on her face most of the time as if she was constantly surprised by everything that occurred. Now I realize it was probably a way for her disguise her contempt for me and many of my colleagues.

Molly wasn’t a dumb Millennial as with many of my colleagues at the Yilmaz Agency and had worked a number of years handling mostly music public relations. However, sometimes I had to wonder when she would suggest a strategy that made no sense, particularly when it involved writing or media relations.

Molly would constantly try to pick apart anything I would say.  It was subtle, though, as she pretended to be so nice when she first joined the firm, but I learned it was only an act to get something she wanted such as help on a project. She was no fucking ally. I believe she undermined and backstabbed me during my years at the agency. Unfortunately, it was hard for me to know for sure as I worked alone in the L.A. office during most of my time at the Yilmaz Agency.  Her contempt for me still came through in emails and our phone call and phone conferences. I dreaded working on accounts with her and was happy when I could avoid it.

Molly constantly questioned my writing — although she couldn’t write worth a shit – and my management skills. Molly was always looking for things I missed or a strategic decision I made she didn’t agree with. She actually told Lulu that she didn’t respect me and didn’t feel I brought a steady, experienced management approach to the job even though I had a lot more experience than she did in every area of public relations.

“Molly doesn’t feel you bring a strong enough management presence to the job,” Lulu told me.

I naturally was pissed off as I thought Molly was an uncreative public relations hack who did nothing more than provide empty, slick management skills to her position. She lacked real vision and creativity and hid this is busy work. 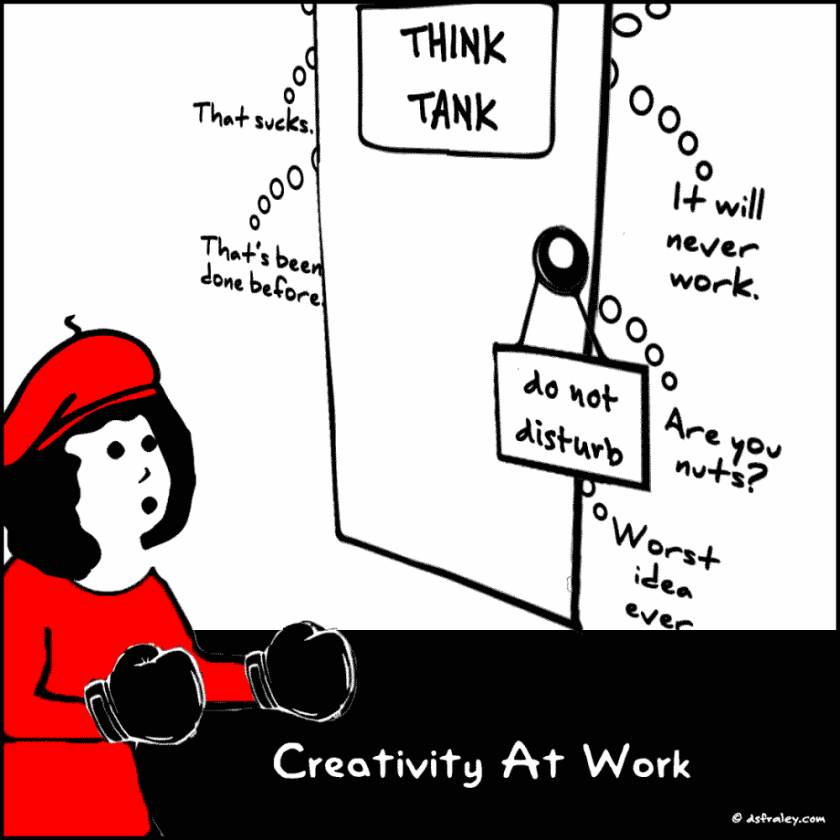 Molly would also get frustrated when she thought I wasn’t handling an account as she would. She put me in charge of the U.S. media relations for our airline client and then questioned my every move. We butted heads eventually as she was clueless to effective media relations strategy on the account. At one point, we set up a schedule to reach out to the media with a different pitch almost every week. The problem is that we were pitching the same media over and over and they were getting sick of getting bombarded from our pitches and client news. A number of our media contacts began complaining to me about sending too many pitches in a short time. I told Molly this and she ignored me. It was when I realized Molly knew nothing about media relations strategy. She approached media pitching as she did every other part of her public relations job — she pushed the paper. The only problem is that you must avoid pissing off the media at all costs and sending them constant client news with no sense of timing is a sure fast way to get ignored. This is death to a publicist.

Yet it was Molly’s lack of creativity that stuck with me. I would work to come up with creative angles for our airline clients pitch letters and press releases and she would pick them apart and rewrite them into boring, cliched angles that had little or no chance of being picked up. 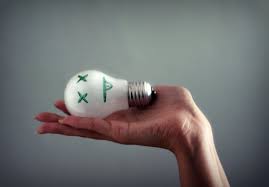 I was relieved when we lost the airline client as I wouldn’t have to work with her micromanaging ass anymore. As you could imagine, both Lulu and Miriam loved that Molly had an obsessive attention to detail, but I thought Molly (as with Lulu and Miriam) always missed the bigger picture – the importance of securing media results for our clients and building their brand presence.

Unfortunately, before Miriam left, she put Molly on the team of a Canadian audio manufacturing client I was managing. Although she was only on the team to reach out to the so-called music media she had contacts with, Molly quickly questioned everything I did on the account. She wanted us to send out more pitches on the account even if we didn’t have any news to share. It was our airline client all over again. I was frustrated but this time I ignored her suggestions as she had mine. I was running the account after all.

Yet it soon became obvious Molly was also truly miserable at media relations. I knew this from working with her on the airlines and housewares clients, but in those cases, she could hide behind her administrative duties and spending a lot of time running these accounts as a reason for not delivering results herself.

After several months, Molly couldn’t secure a single placement for our audio client even though she boasted about having great contacts in the music business and that’s why she wanted to be on the account. By contrast, I had no trouble obtaining numerous high-profile stories for our audio client and I knew this really pissed Molly off. She eventually used the excuse of her heavy workload to stopping working on the account. I knew she really was embarrassed that she couldn’t deliver media relations results on an account in an industry she was supposed to be a past expert on. I had to wonder after that if anything she said was true and that her past experience was a complete lie.

Molly also wasn’t as bright as she acted. Heavy technology accounts put her off. When Molly was put in charge of running a Turkish tech client – after a dumb Millennial that managed the account left for another firm – she was in a panic. She was having trouble understanding the client’s technology which was essentially business to business payment software for companies.

Suddenly, after years of being snotty toward me and stabbing me behind my back, Molly was very nice to me again. This time, though, I knew it was because she needed my help to help manage the Turkish tech client even though she would never admit this. Although that didn’t stop Molly from trying to micromanage me and rewrite all the pitches and press releases I had written for this client. She did this even though she knew nothing about the technology. Despite her paper pushing efforts, though, we eventually lost of the account anyway.

Sal Ramirez was another paper pusher that had the misfortunate to work with at my first PR agency early in my career. He was one of the worst writers that I have ever worked with, that is until recently when I started working with Millennials. He was even worse a writer than Molly. In fact, Sal had trouble with basics of press release writing, but he was not someone who just come out of school and had been working for an agency for years before joining our firm. I remember a friend of mine at a local newspaper lamenting how he received a press release from Sal that had none of the essential information you would expect from a press release – the where, what, why and how. It was such an embarrassment for our agency, but unfortunately our boss Jimmy Mears didn’t care. He liked Sal’s administrative skills and would tap me for the creative, brainstorming tasks. 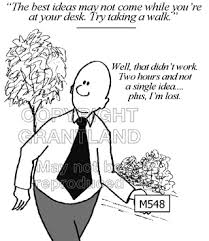 Sal would also ask me for help in rewriting his press release and pitches and adding a more creative flair. I, of course, I helped him as I am a team player, but Sal never seemed all that appreciative. Worst of all, he never seemed to improve and was still a crappy writer when I left the agency a few years later.

Clients liked Sal as he was solid in handling accounts, however, he was constantly coming up short with media relations efforts and I would have to be brought in to try to obtain coverage and save the account. It was ridiculous after a while as his accounts were always in “media relations trouble.”

Sal, like Molly, was also terrible in brainstorming sessions, providing little or nothing useful. Many of his ideas were clichés or borrowed too heavily from Hollywood movies. Yet he never hesitated to criticize other’s ideas, particularly mine.

I didn’t mock him or criticize his lame ideas, though, but no one ever used his suggestions and he knew down deep they were terrible. 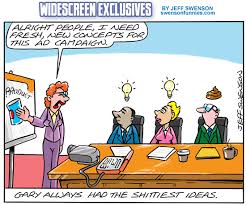 They say there is no such thing as a bad idea in brainstorming, but I believe Sal was an exception to the rule.

When I left the agency, Sal was determined to show me up. He and an obnoxious jock intern named Lance teamed up to come up with ideas for an upcoming obesity clinic’s event in San Diego where people would turn in their previous large pants to show off their weight loss. They came up with all of these odd and crazy ideas and taglines. Some were good, but mostly it was overkill. I even bet Lance came up with most of the ideas, Sal was so proud of what they came up with. Even though he didn’t say it – Sal was implying they didn’t need me for creativity anymore. He did this once in all of my years at the agency.  By contrast, I tried to bring a strong level of creativity to every account and do the same today, not just once in a blue moon like Sal.

Paper pushers or uncreative gutless wonders like Molly and Sal – that I have found at every agency or company I have worked at — are just more a reminder that I am in the wrong business that rewards slick, management skills over creative vision.